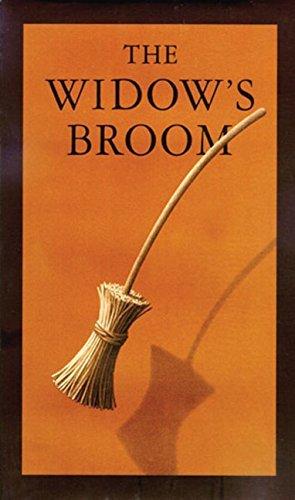 One day as a witch is flying over widow Minna Shaw’s home, her broom loses the power of flight. The witch falls headlong into Minna’s garden. When Minna discovers the witch lying there in the morning, she takes her in and puts her to bed. After only one day, the witch is healed. That night as Minna sleeps, the witch departs—leaving behind the broom she thinks is powerless. Minna decides to keep the broom and use it for sweeping the floor. She is astounded one day when the broom begins sweeping the floor on its own! Quickly overcoming her fear, the widow teaches the broom to help her with other tasks. The broom learns how to chop wood, fetch water, and do many other useful jobs. Minna’s neighbors, the Spiveys, are not nearly as thrilled with the broom as she is, believing it to be frightening and wicked. One day, two of the Spivey boys taunt and tease the broom as it works. Pushed to its limit, the broom gives the boys a thrashing. The Spiveys arrive at Minna’s house determined to take revenge. Minna shows them to the broom closet. They take out the broom they see and burn it. Life soon returns to normal until one day Minna tells the Spiveys she has seen the ghost of the broom! Mr. Spivey sees a white broom that night, circling his house with an ax. The Spivey family moves away, and Minna Shaw is left to live in peace with her broom—not burned after all, simply painted a ghostly white.

In The Widow’s Broom, the text is straightforward and clear, while the pictures are moody and layered with emotion. The drawings’ unusual texture was created by using litho pencil, which is very dark pencil, on coquille board. The supernatural is introduced into normal life with Van Allsburg’s typical knack for pushing against the boundaries of reality. As readers, we believe as easily in the falling witch and the broom that sweeps by itself as in the kindly Minna Pratt.

While this book provides wonderful Halloween reading, it raises an important issue that is relevant year-round: Van Allsburg’s story teaches tolerance. Just as the Spiveys fear the broom and think it wicked, the rest of us humans sometimes fear what we don’t understand. Minna herself does not understand what makes the broom go, but she accepts it and welcomes it into her life. In discussing the main ideas of The Widow’s Broom with your class, you can help students to uncover this important lesson. Both the images and the story hark back to the real witch trials that occurred in this country—a real-life situation in which lack of tolerance caused a great deal of unnecessary suffering. If you are working with mature older students, they may find this an interesting link. With younger students it may be more appropriate to limit the discussion to the ample lessons provided by the book itself.

Fritz makes his appearance in The Widow’s Broom as the Spiveys’ little dog who is flung into a tree by the broom.

The Widow’s Broom is filled with pictures that create an eerie and mysterious mood. When working with younger readers, discuss how the pictures add these feelings to the story. Discuss how the pictures and words work together to create the world of Minna Shaw and her magic broom. With emergent readers, you may want to focus on how readers can sometimes tell the story of the book through the pictures alone. This book provides a wonderful model for children who are working on this skill.

Also for younger readers, the book provides several opportunities for word work and the study of simple spelling patterns. For example, studying the word “broom” leads to the discovery that if you know how to spell “broom,” you also know how to spell “room,” “boom,” “loom,” etc. Slightly more advanced students can be drawn into an investigation of the different sounds oo makes—for example, broom, took, wood. Chris Van Allsburg’s rich text contains several words that may be difficult for even more advanced readers, providing an excellent opportunity to teach children about rereading and using context clues to help when they come to a word they don’t know.

If Objects Were Alive: An Upper-grade Writing Lesson

Background Knowledge: This lesson works best with students who feel comfortable writing independently about topics of their own choosing. It fits well within a fiction-writing unit but can be presented independently as well.

Introduction: Read The Widow’s Broom to your students. Tell them to observe to how Van Allsburg makes the broom come to life and invests it with personality, because they will get to try out a similar idea in their own writing later on.

Teaching: As you read the story to your students, you may want to focus on passages and pictures that describe the broom’s behavior. For example:

In the morning she led the broom outside and found that it was a very good student. She needed to show it how to do something only once. Soon the broom could chop wood and fetch water, feed the chickens and bring the cow in from the pasture. It could even pick out simple tunes on the piano. Or this:

As days went by, the broom seemed as innocent and hardworking as ever. Though it had learned to do many things, sweeping brought it special pleasure. It was, after all, a broom.

Tell the students that Van Allsburg chose to invest an ordinary, everyday object with personality and intelligence, and that he worked hard to describe those attributes in his writing. Tell them that their job is to choose an everyday object that they use a lot and to imagine that it could move and think on its own—just like Minna’s broom. As they write a story about the adventures this might bring about, encourage them to describe their object carefully, as though it had its own personality.

Writing Time: As your students write, confer with them individually about their work.

Share: Many children are likely to want to share their work. You may want to organize them into partnerships or share groups so that each child has a chance to read his or her story aloud. If time does not permit, choose one or two children who have described their object-character vividly and created a sense of that object’s personality.

Adapting This Lesson for Use with Less Experienced Writers:

Telling the Story Through the Pictures: A Lower-grade Reading Lesson

Background Knowledge: This lesson works best if you have already read The Widow’s Broom to your students more than once. Retelling a story successfully through pictures requires the students to be familiar with the storyline and the characters.

Introduction: Tell your students that you will be reading The Widow’s Broom to them and then showing them how readers can retell what happened in the story not just by repeating every word but by using the pictures as a guide. You might want to reserve extra time to read the whole book aloud to your students so that it is fresh in their minds, but this is not necessary.

Teaching: Tell your students to watch you as you retell the story of Minna and her broom by looking at the pictures. Tell them that this book is especially good for this project because not only are the pictures very expressive, but sometimes Van Allsburg lets them speak for themselves and doesn’t include words on the page. As you retell, point to the pictures you are looking at. You might say something like this:

“A witch was riding an old broom. (turn page) The broom stopped working all of a sudden, and the witch and broom fell through the air. See, there are no words at all on this page so I have to use the pictures to help me tell the story! (turn page) Minna Shaw, the widow, found the hurt witch in her garden and took her inside. (turn page)”

As you go through the book, “think aloud” for your students about how you are using the pictures to help you tell the story. Stop when you get to the page where the broom is flinging the dog into the tree—there are no words on this page—and ask your students to turn and talk about how they would retell that page in the book.

As you send your students off to explore their own picture books, remind them that they can do this work on their own.

Reading Time: As your students retell, confer with them individually about telling the story in a book by looking at the pictures. You may want to bring your copy of The Widow’s Broom with you as you confer so that you can model this process.

Share: Ask a child to retell a storybook for the class by looking at the pictures.