A Conversation with Chris Van Allsburg by Anita Silvey 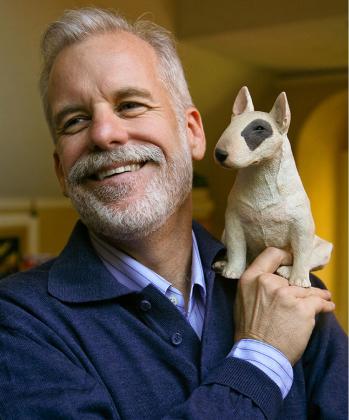 Chris Van Allsburg talks about his childhood, his artwork, and the creation of The Polar Express

A) I grew up just outside Grand Rapids, Michigan. There were open fields, trees, and unpaved roads. The houses weren’t big — they were nice, small houses for families of four or maybe five. There were still places nearby where I could catch tadpoles. There were places to go sledding, and fields where you could play baseball — not someplace surrounded by a fence, just open fields. I rode my bike to school.

My father ran a dairy. Not the kind with cows, but one that converted milk into ice cream, butter, and cottage cheese. On Sundays, my father would take me along with him to the dairy to make the cottage cheese. There was a giant stainless-steel vat with milk heating up in it. My job was to push a floating thermometer around the big tank, using a stick, to see if the tank had a uniform temperature. Then my father would put bacteria in to start the process of turning milk to cheese. Then we’d lower the lids on the vat. A couple of days later, you’d come back, and there would be guys standing in the vat with boots on and big shovels, shoveling the cottage cheese.

Q) What were your favorite childhood pastimes?

A) I loved to build models: cars, planes, and boats. In fact, I built these models rather obsessively and even as a child had an unchildlike concern for craftsmanship.

Q) Did you always know that you wanted to be an artist?

A) I drew as a child but didn’t take art classes in high school. I entered the University of Michigan with a vague idea of becoming a lawyer, but as a lark I took some art courses in figure drawing. I rediscovered the pleasure that drawing had given me as a child. When I studied three-dimensional art it reminded me of building models. I thought it was great that I was going to get a college degree for doing something I did when I was eight years old. Ultimately, I graduated with a degree in sculpture. By that time I’d forgotten about law school, and went to the Rhode Island School of Design to continue studying sculpture.

Q) How did the story for The Polar Express occur to you?

A) I had this idea, this mental image, of a young boy who, perhaps while visiting relatives or something, hears a strange sound in the middle of the night, and he goes outside. It is a very foggy, misty night. He walks through these woods and sees a train standing still, just sitting in this kind of fog. Where is it going to go? Well, there are a lot of places a train could go and take a child, but where would a child want to go more than anywhere else? As I reflected on this mysterious train, it occurred to me that it must be a cold night, because the engine’s steam is heavy. It might even be winter. Maybe some snow is falling. Perhaps it’s December, close to Christmas, or even Christmas Eve. Then I asked myself the question again: where would a child want to go more than anywhere else on Christmas Eve?

Q) Did the story take you long to write?

A) The Polar Express was the easiest of my picture book manuscripts to write. I created only one draft and had to make only a few changes to the text. Once I realized the train was going to the North Pole, finding the story seemed less like a creative effort than an act of recollection. I felt, like the story’s narrator, that I was remembering something, not making it up.

Q) What is The Polar Express about?

A) The Polar Express is about faith, and the power of imagination to sustain faith. It’s also about the desire to reside in a world where magic can happen, the kind of world we all believed in as children, but one that disappears as we grow older.

Q) How did you create the artwork for the book?

A) I was interested in seeing what I could do with oil pastels; I attempted to achieve the qualities of the light at night by mixing color complements (reds with greens, oranges with blues) to bring out the ambiguous hues of colors in low light.

Q) Did you use models to create your images for The Polar Express?

A) Yes. The children were neighbors of David Macaulay. And David himself posed as Santa. But for most of the book — the train interiors, the landscapes, the North Pole — I relied on my imagination.

Q) Was there a particular artistic inspiration for the artwork in The Polar Express?

A) The mood and palette for The Polar Express were inspired by the paintings of the 19th-century German artist, Caspar David Friedrich. He was a landscape artist who created wonderful panoramic views with single small figures in the composition. I wanted to use the tertiary colors, the browns and the violets, to get the somber atmosphere I sensed in Friedrich’s work.

Q) Were you surprised by the success of The Polar Express?

A) It was a surprise for everyone, especially when it appeared on the New York Times bestseller list. Kit William’s Masquerade had been on the list, but I don’t think any other picture book had appeared there. Houghton initially printed 50,000 copies, certainly indicating support for the book. But yes, we all were surprised.

Q) How would you describe the kind of fantasy you create in your work?

A) The idea of the extraordinary happening in the context of the ordinary is what’s fascinating to me. Alfred Hitchcock always explored the ordinary person who was visited by unaccountable sorts of events and was pulled out of the kind of reality that he could rely on. I think fantasy is more provocative when it happens in the context of ordinariness, or things that you recognize. That’s why outer space fantasies, fantasies of the Middle Ages, pixies, dwarfs, giants — none of that is especially appealing to me as a writer. I prefer surreal elements within a realistic landscape.

Q) Who was the audience you had in mind when creating The Polar Express?

A) I write for what’s left of the eight-year-old still rattling around inside my head. I think it’s a mistake to try to create something for a particular audience. You end up spending more time wondering what they like and less time wondering about what’s really important to you as an artist.

Q) Have you been surprised by activities inspired by the book?

A) Surprised and pleased. I’ve received many letters (and some photos) that describe reenactments of the book in auditoriums and classrooms around Christmastime. In North Conway, New Hampshire, they reenact the ride itself with an old steam engine that makes a trip to a nearby ski lodge. The passengers (which include quite a few kids in their pajamas and bathrobes) disembark there, where about a hundred citizens of North Conway, dressed as elves and carrying lanterns, greet them. At the lodge there’s a presentation of the story, Santa appears, and as they leave, all the children are given a small sleigh bell.

Q) Do you often get interesting letters from your readers?

A) I have a favorite one, about Jumanji. “Dear Mr. Van Allsburg, I love the books you write. I am so glad your books are so weird because I am very weird. I think you are weird but great. I wish a volcano and a flood could be in my room when I am bored.”

Q) What will you be doing in the next fifteen years?

A) I don’t make plans. All my life, one artistic impulse has simply led me to another. I thought once that I was going to become a lawyer, but I became a sculptor. That led me to drawing, which led me to storytelling and, recently, I’ve been doing some writing for film. Following my muse has worked out pretty well so far. I can’t see any reason to change the formula now.